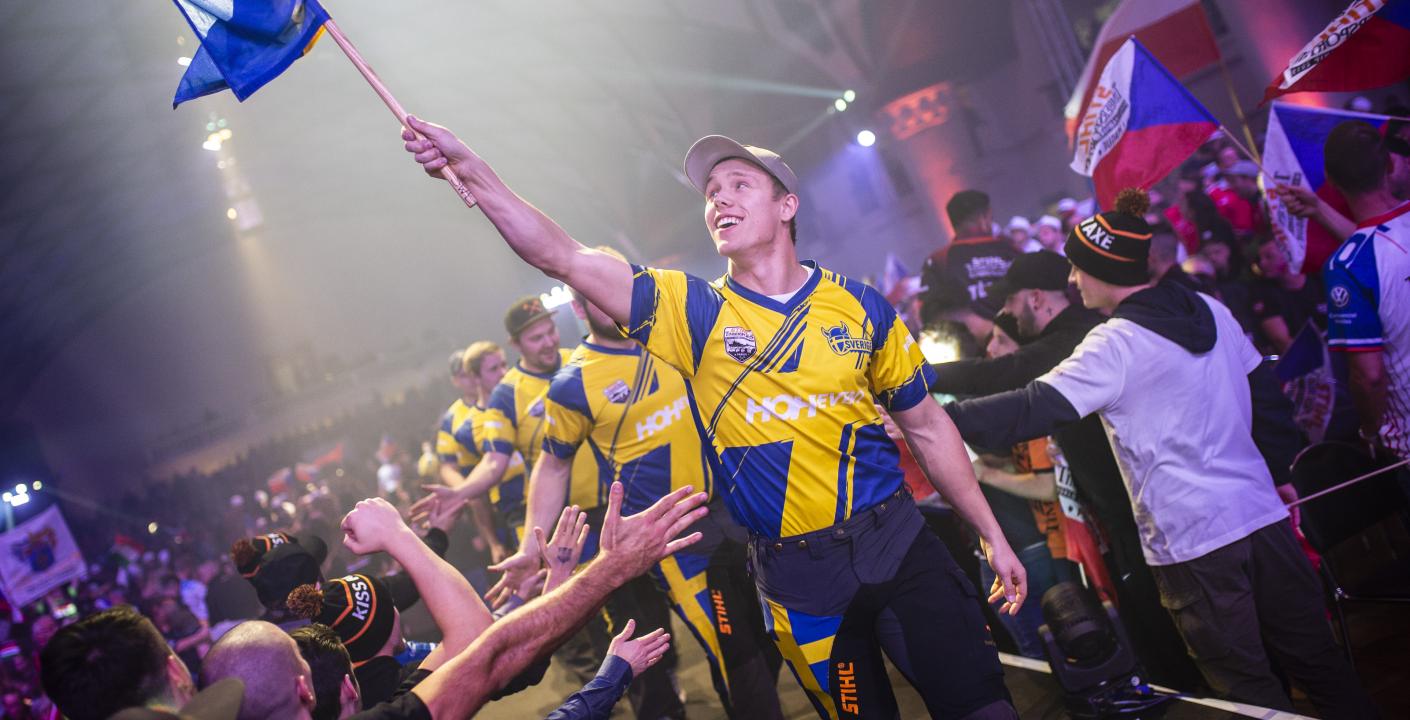 All eyes are on the TIMBERSPORTS® World Championships in Gothenburg, Sweden – Nordic athletes challenge the elite

With only weeks to go until the TIMBERSPORTS® World Championships in Partille Arena, the Swedish, Danish, and Norwegian national teams stand ready to face the world elite. For the first time since 2019, the most prestigious competition of the extreme sport is held in front of an audience, and the expectations are high.

The intense season of the extreme sport TIMBERSPORTS® started in May, and all that remains is the highlight of the year. In three weeks, the World Championships in TIMBERSPORTS® are held in Sweden and Gothenburg for the very first time, and the host country is expected to have good chances in the competition.

During Friday, October 28, the team competition of WCH 2022 takes place. 20 nations, including the major nations USA, Canada, Australia, and New Zealand, gather in Partille Arena. The athletes compete in teams of four and face the other nations in duels, in the four disciplines Stock Saw, Underhand Chop, Single Buck and Standing Block Chop. Each athlete completes each discipline in a relay. The last time the WCH was organised, Sweden finished in seventh place. This year, the hosting national team has a great season behind them, and their sights are set on medals.

– This could be a very good WCH for Sweden. We have a strong team, and we are ready to compete. Now it’s really about fine-tuning the details ahead of the competition, says Ferry Svan and continues:
– The favourite tipped nations, Australia, New Zealand, and the USA, will be tough to face. But at the same time, we know that anything can happen, we've seen that before, and we'll do everything we can to beat them.

During Saturday, October 29, the individual competition will be held. The twelve top TIMBERSPORTS® athletes of the world battle for the title, with the two additional disciplines: Springboard and Hot Saw. One of the twelve athletes is Swedish Emil Hansson (21). Hansson represents Sweden as the youngest athlete of the competition, but is, at the same time, the second-best athlete in Europe according to the ranking.

The Danish national team makes a comeback and becomes historic
During the season, Danish athletes have competed in both Nordic and European competitions. Throughout the season a national team has taken shape. In the Nordic Championship in August, they competed for the first time together ahead of the highlight of the season: World Championship in Gothenburg. One of the four athletes is Felixia Banck, who becomes the first female athlete to participate in a TIMBERSPORTS® WCH.

The Norwegian national team are preparing with Olympic legend Olaf Tufte
Norway’s TIMBERSPORTS® athletes have competed in several Nordic competitions during the season. Now the team competition in the World Championship awaits. Ahead of the team competition, the Norwegian national team has been preparing with two-time Olympic gold medallist in rowing, and former TIMBERSPORTS® athlete, Olaf Tufte.

TIMBERSPORTS® World Championship, October 28–29, is held in Partille Arena, just outside Gothenburg in Sweden. To cover the competition live, a media accreditation is needed. Sign up for accreditation here.

To experience the competition from the stands, more information and tickets can be found here.