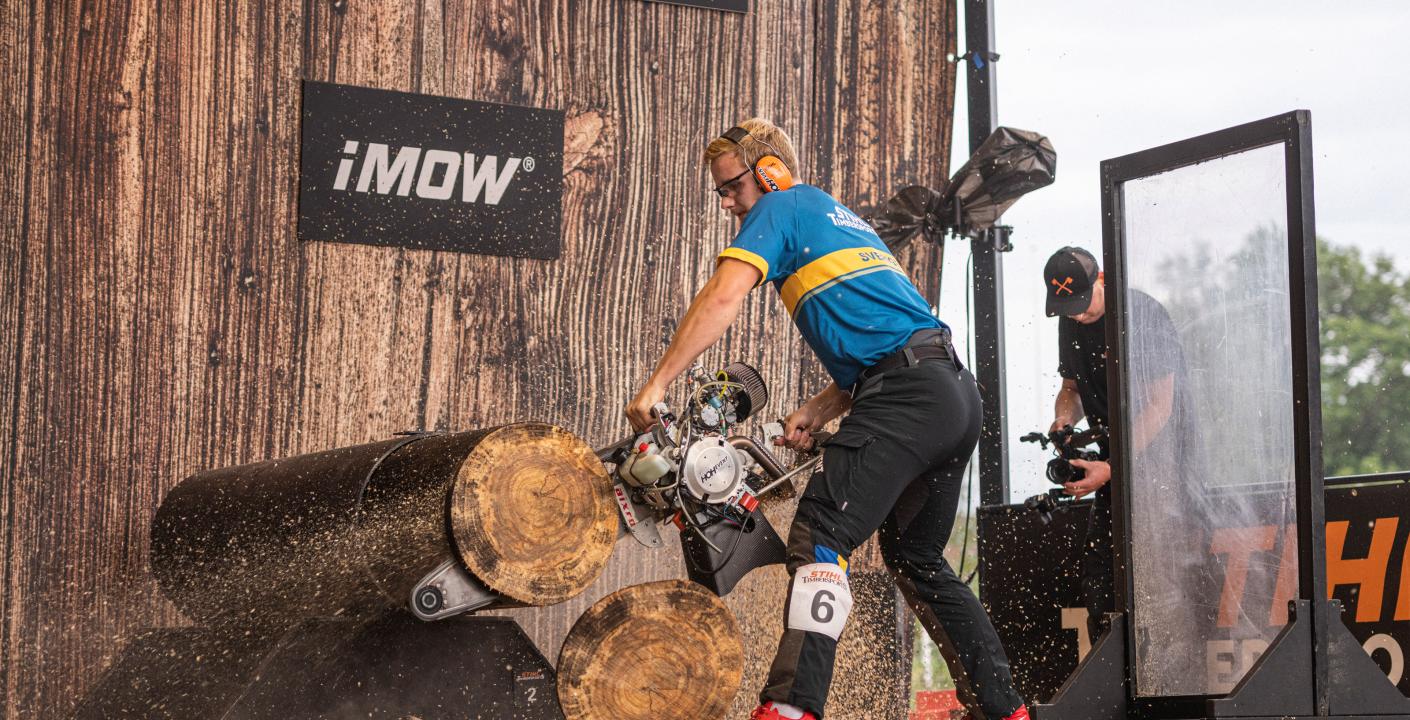 There was thrilling action when the Nordic Championship took place in Stenkullen on Saturday, August 27. After incredibly even heats between Ferry Svan and Emil Hansson, Hansson took home the title as Nordic Champion after the disqualification of Ferry in the last discipline. Emil Hansson, 21, from Mora, will thereby be the athlete that represents Sweden in Partille Arena in October.

It was a thrilling competition in Stenkullen on Saturday, August 27, when Emil Hansson stood as the winner of the Nordic Championship 2022 and will represent Sweden in the Individual World Championship in Partille Arena in October. Ferry Svan had a strong start and was in the lead up until the last discipline, when he unfortunately disqualified in the discipline Hot Saw. Pontus Skye, from Sweden, placed third and made a strong performance throughout all the disciplines.

“I went into the competition with the goal of having a better competition day than I had during the Nordic Cup in Orsa, where I had a bed feeling. That feeling stayed with me during the first two disciplines, but then came Standing Block Chop, where I felt safe and got a good time – and I managed to caught up”, says Hansson.

“Now I am going home, to recharge, and train even more on the disciplines that I want to improve in. I will also bring with me all the positive things as well. There will be many great athletes in WCH and I will probably be the youngest one. I do not dare to say anything about my chances yet. There are six disciplines, and you have to be good at all of them, that is the tricky thing. You cannot afford to lose time anywhere”, says Hansson.

Ferry Svan, 25, was a big favorite in the upcoming competition and has since a long time had the goal to win the Nordic Championship and represent Sweden in the Individual World Championship. The results however, means that Ferry will not get to compete in the individual competition and instead have to set his focus on the team competition on October 28.

“I am actually happy with my performance today. It is just those few millimeters in Hot Saw that was over the line. I am of course very disappointed, but that is the sport – small margins”, says Ferry Svan.

Women’s class makes a debut in the Nordic Championship
For the first time in a Nordic Championship, the Women’s class competed and Swedish Tove Njåstad took home the gold medal. Besides the first place, she also set two new national records, one in Stock Saw (11.99) and one in Single Buck (31.68). Swedish Åsa Nordberg came second and Danish Felixia Banck, who made her debut only a few weeks ago, took a third place with a new national record in Single Buck (46.62).

Two new records for the Danish Athletes
In the Rookie class, the two Danish athletes Bo Andersen and Esben Pedersen both set new records. Bo in Standing Block Chop and Underhand Chop, and Esben Pedersen set a personal record in Underhand Chop as well as a national record in Standing Block Chop. Adam Bjöns won the Nordic Rookie Championship, after impressive heats, right before Edvin Karlsson and Bo Andersen in third place. All of them performed very well during today‘s competition.

The Swedish National Team took home the gold medal
The Nordic Team Championship continued on Sunday with eight teams in total, from Sweden, Norway, Denmark, Poland and Italy. After the first time trial, and a quarter final there were four teams left, Sweden against Norway and Poland against Italy in the two semifinals. The winning team of the respective semifinal then met each other in the big final. Sweden against Italy. The Swedish team consisting of, Emil Hansson, Ferry Svan, Calle Svadling and Pontus Skye took home the gold medal. That is also the team that will compete in the Team World Championship in Gothenburg in October.