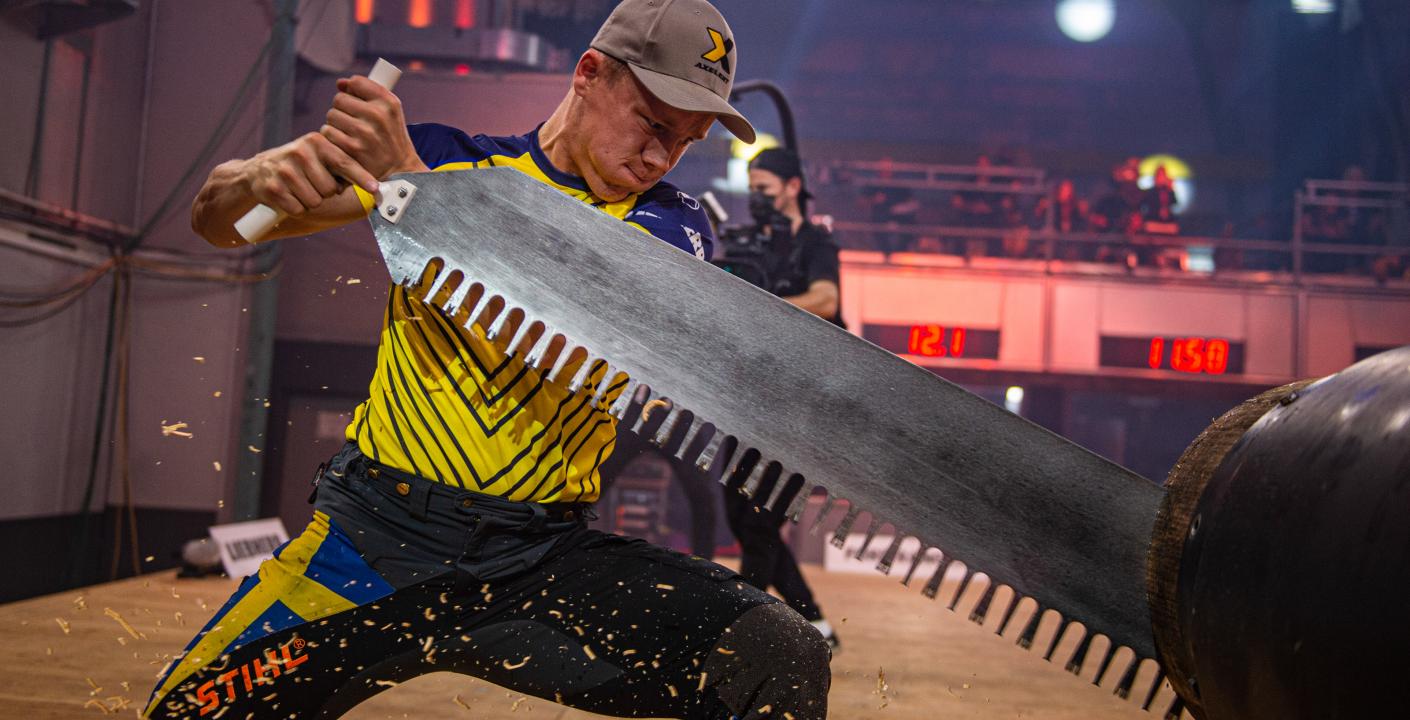 The competition, which took place in Munich, Germany, on Saturday evening, offered several exciting and nail-biting moments. The twelve international athletes have had an eventful season of competition, following the resumption of the TIMBERSPORTS® season worldwide. Not least Nordic athlete Ferry Svan, who has had a successful season, becoming both Swedish and Nordic champion. He entered the World Championship ranked second in Europe and was also the youngest athlete competing in the Individual World Championship.

The last time Ferry competed in the Individual World Championship, in 2019, he placed seventh – and after Saturday's competition, Ferry now leaves Munich with an impressive fourth place. It is the all-time best placing for a Nordic athlete at an individual World Championship, and Ferry is the only Nordic athlete to reach the third and final round, which includes the Hot Saw finale.

“I'm quite happy with my placement. If I had performed better in Springboard, I might have won a medal, but it’s easy to be wise after the event. But the season has been very good, I've kept a consistent level and performed well, even at my worst. All in all, it has been my best season so far,” says Ferry.

Ferry Svan had a varied day of competition, and when it was time for the incredibly demanding Hot Saw discipline, he came in fourth place, which was also Ferry's final placing. He also took a personal best in Hot Saw, with an impressive new time of 6.58 seconds.

“The first few steps before the elimination started felt okay. I had a miss in the Standing Block Chop that wasn't supposed to happen. But I did good at the beginning, so it feels good. I messed up a bit more in the Springboard and Single Buck. I took a chance and tried to land a good time and it didn't really work out. Then my performance in the Hot Saw went very well. I set a personal best, only a few tenths from the Nordic record,” says Ferry.

The World Championship culminated in a tense Hot Saw finale, where American Jason Lentz set a time of 5.70 - which then had to be checked in connection with suspicions of a false start. After Lentz was cleared by the judges, he was also crowned TIMBERSPORTS® Individual World Champion 2021. Several impressive records were set during the evening – both world records and a whopping six personal bests. Among others, French athlete Pierre Puybaret set a new world record in the Single Buck event. With a new record time of 11.58 seconds, Puybaret beat Ferry Svan's previous record time of 12.01 seconds.

In the Individual World Championship, athletes earn points in all six TIMBERSPORTS® disciplines: with saw in Stock Saw, Single Buck, and Hot Saw, with axe in Standing Block Chop, Underhand Chop, and Springboard. The disciplines are divided into three rounds with the lowest scoring athletes eliminated after each round. The last round is the finale in Hot Saw.

Saturday's Individual World Championship concluded this year's TIMBERSPORTS® season. Next year, the World Championship of the extreme sport will be held in Partille Arena, just outside Gothenburg. On 28-29 October 2022, the world elite will gather again, when both team competition and spectators are scheduled to return after a period marked by COVID-19 pandemic. Tickets for the event, which will be held in Partille Arena, are now on sale via www.partillearena.se/timbersports.

Full results and final results for the 2021 Individual World Championship in Munich are available via the STIHL TIMBERSPORTS® database.