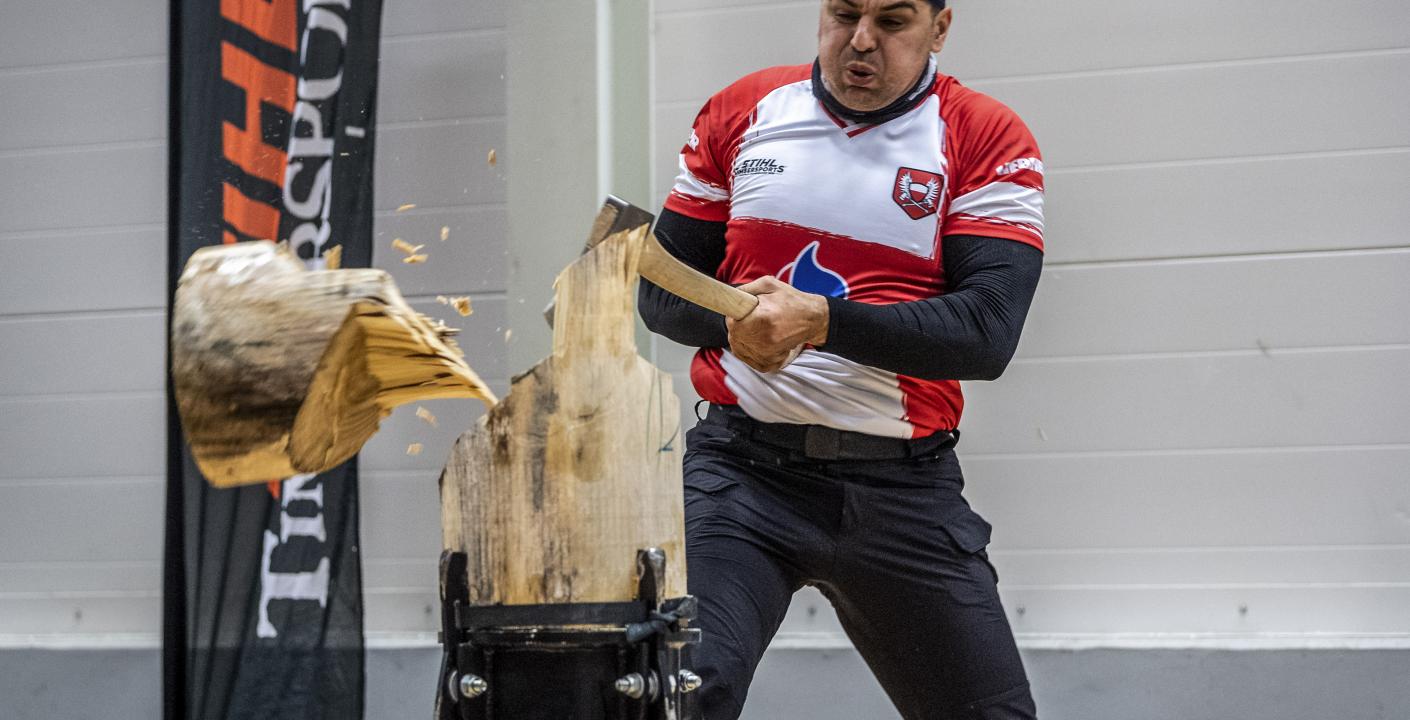 Dubicki, who is a two-times Polish national champion and has enjoyed top five finishes at the World Trophy and Team World Championship, carved up a total points tally of 59 to pip Belgium’s Koen Martens to the inaugural title. Martens finished in an impressive 57 points, with the Czech Republic’s Martin Komárek rounding out the top three on 53 points.

Dubicki, who calls himself “Axe Machine”, dominated across the woodchopping disciplines, taking the maximum 12 points on offer by finishing first in the Underhand Chop (15:08 seconds) and the Standing Block Chop (15:98 seconds), whilst a top three finish in the infamous Springboard (54:93 seconds) earned him a further 12 points. Dubicki recovered well from a shaky Stock Saw (12:93 seconds), which saw him secure just two points in the first of the sawing disciplines, holding his own with third and fourth place finishes in the Single Buck (12.73 seconds) and Hot Saw (8:46 seconds) earning him 12 and nine points respectively.

Martens provided stiff competition and got off to a flying start in the first two disciplines of Underhand Chop and Stock Saw, but he could not maintain that momentum across the following three disciplines, with a stunning time of 6:12 seconds in the Hot Saw not enough to overturn Dubicki’s lead, despite earning him the maximum 18 points on offer.

For Czech chopper Komárek, it was a case of what might have been, with the three-time Individual World Championship silver medalist failing to complete the Hot Saw discipline despite leading the field in total points going into the final round.

The full results for the STIHL TIMBERSPORTS® Virtual European Championship can be found here.

“The competition was in isolation, but I tried not to think about that. Before the start of each discipline I concentrated on my own start, prepared individually and focused mentally on achieving the best possible time.

“I’d like to wish all of my family, friends, fellow athletes and fans lots of health and happiness in the New Year.”

Fourth and ninth place for Nordic athletes
The Nordic countries were represented by Ferry Svan from Sweden, a well-known athlete on the international competition stage, and Vebjørn Sønsteby from Norway, current Norwegian champion. Ferry was in great shape and ended up on fourth place after doing well in disciplines such as Standing Block Chop and Springboard. While Vebjørn was only one placement from moving on from the first round, ending up on a ninth place.

This year’s Virtual European Championship replaced the cancelled Individual World Championship, which could not take place due to the COVID-19 pandemic.

The event saw 14 of the very best woodchopping and sawing athletes from around the continent go blade-to-blade from different locations to determine the first ever Virtual European Champion.

All performances were observed by STIHL TIMBERSPORTS® officials and the times and video footage were sent to and approved by official judges.