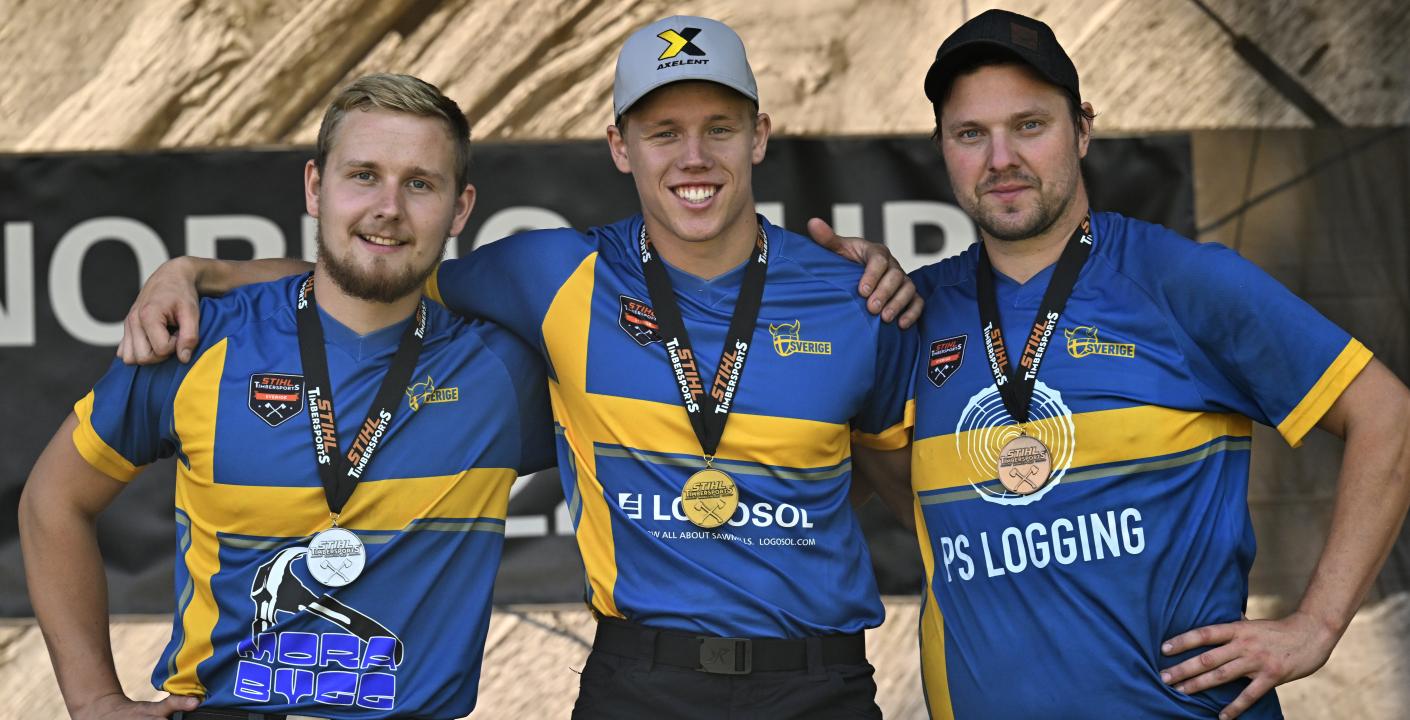 The final part of the TIMBERSPORTS® Nordic Cup competition series took place this weekend in Orsa, Sweden. All competition levels were set to battle for the gold medal and for the overall victory in this year’s competitions series. The Rookie and PRO athletes also competed for a spot at European Nations Cup in September. The two best athletes of the levels were to qualify. At the end of the day, Swedish athletes Ferry Svan, Emil Hansson, Edvin Karlsson and Dane Esben Pedersen will travel to Switzerland to represent the Nordics.

On Sunday, the PRO athletes competed in all six disciplines. After the end of the competition, Ferry Svan stood at the top of the podium and as the overall winner of the entire Nordic Cup competition series. The Swede showed a taste of top form and gave a real message of strength when he won five out of six branches.

The closest to threatening Ferry was fellow countryman Emil Hansson, who took second place on Sunday and in the Nordic Cup. Both Swedes are thus qualified for the European Nations Cup in mid-September. For Ferry, it means a chance to regain the title after the win in 2020.

- It feels very great and special to win today because I did it more or less without mistakes. I've been in very good shape lately and I've prepared myself with competitions in both England and the USA, says Ferry Svan.
- It will be fun to compete on a European level! My goal is to take back the title in the competition and if I do a good competition like today, it will go my way, continues Ferry.

Home favorite Edvin Karlsson from Orsa joined Saturday's Rookie competition as favorite after being undefeated in the competitions in both Jönköping and Norwegian Hamar. Danish newcomer Esben Pedersen offered tough opposition after winning the Underhand Chop event. But Edvin Karlsson came back and once again placed himself at the top of the podium - as gold medalist and overall winner in the Rookie class for the Nordic Cup. Esben Pedersen came in on a strong second place. The two athletes therefore qualificatied for the European Nations Rookie Cup.

- It feels fantastic to win the entire Nordic Cup and to do it at home! The competition is tough and there are many who are fighting for the medals. It feels good to compete at the European level again. I want to be there and fight for a podium place and considering my position in the Rookie World Championship in May, I should be able to do it, says Edvin Karlsson.

The Swedish men in the Intermediate class also continued to collect medals. This time it was a triple podium for the Swedes. After a tough battle between the Swedish athletes at the top, Viktor Clarmo was at the top of the podium at the end of the day, followed by Peter Eriksson and Emil Svensson. However, it was Emil Svensson who took first place in the overall Nordic Cup.

Female debut for Denmark
Another impressive performance from a Danish athlete was Felixia Banck, who made her competition debut during this weekend. Felixia is the only female athlete in Denmark, right now, within TIMBERSPORTS®. The race was tight between the two with Felixia being only a few seconds after Tove Njåstad in Single Buck. Felixia, who works as an arborist, showed great performance in the Stock Saw discipline where she mastered the chainsaw by winning the women’s discipline and earning the second-best time during all Saturday’s competition, including the men’s competition. In the third and final discipline, Underhand Chop, Felixia was disqualified due to exceeding the time limit.

– It feels great to finally compete! I came here to get some competition experience and I am very happy with my performance, especially in the Stock Saw discipline. Now I will go home and continue to train to get even better times at the Nordic Championship, and to set an approved time for Underhand Chop, says Felixia Banck.