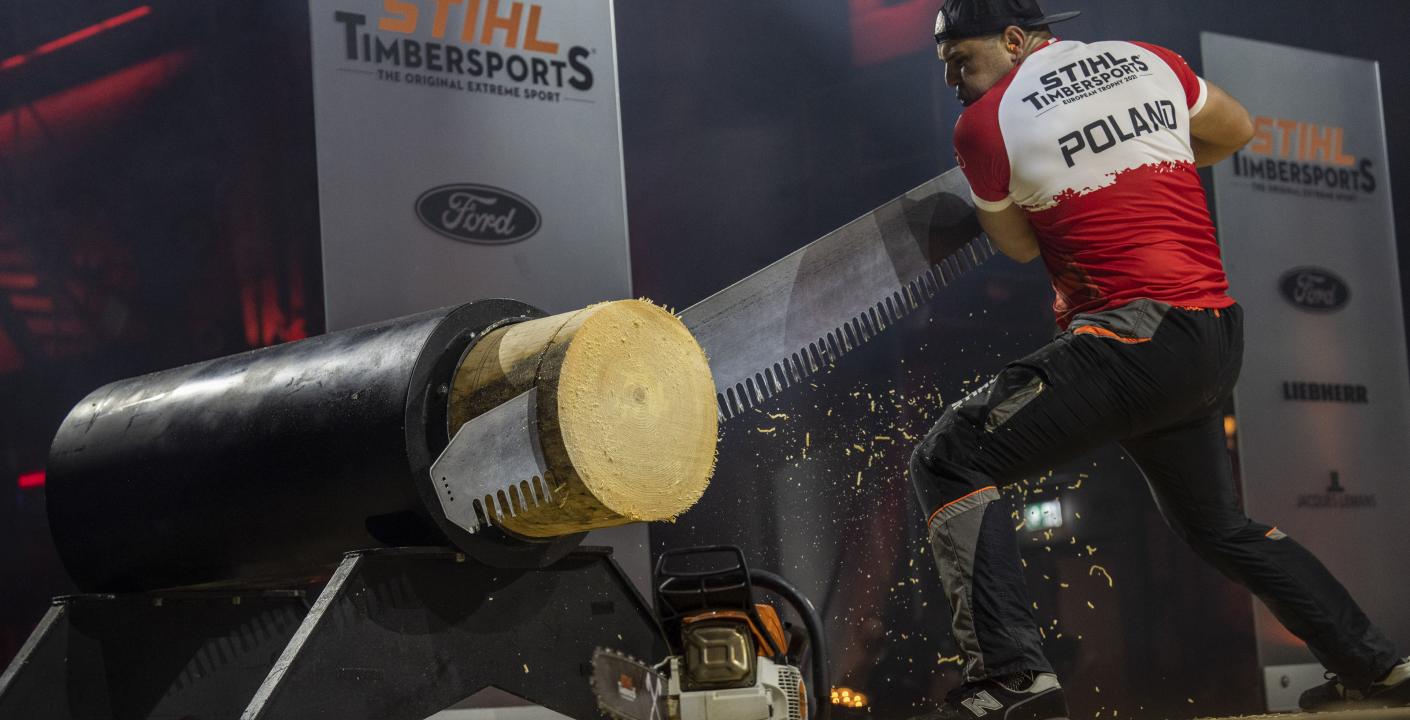 After two years of absence, the physically challenging STIHL TIMBERSPORTS® European Trophy finally made a comeback this Saturday. The top 16 athletes in Europe competed in thrilling knockout heats for the Trophy title. Swedish athletes Emil Hansson and Calle Svadling were prepared to offer tough competition.

Despite a strong start in the time trial, it did not go all the way. Emil Hansson, who debuted in the European Trophy competition, was knocked out in the first round after a disqualification against more experienced athlete Marten Koens from Belgium. While Calle Svadling, who placed third in the last European Trophy, reached the quarter finals before he lost the heat against Pierre Puybaret from France, who later ended on a second place.

– I felt I was in good shape ahead of the competition and when I took a third place in the time trial. But there are many parts where I could have performed better. Still, I am happy with the competition and it was a good experience. Now I will focus on next week and the upcoming European Nations Cup, says Emil Hansson.

– I had a good feeling before the competition and I was very happy with my second place in the time trial that took me directly to the quarterfinals. Once there, I got a little behind Pierre and I got stressed. I would say I am both happy and a little dissatisfied, my goal was a better placement, says Calle Svadling.

At the end of the evening, polish athlete Michal Dubicki was on top of the podium, defending his Trophy title. The strong Polish man was one of the favorites ahead of the competition and disappointed no one. Heat after heat he beat out his competitors with superior performance.

Rookie European Championship
Earlier during the day, the Rookie European Championship was held. The competition is usually a World Championship but was executed under adapted forms with only European athletes. Swedish Edvin Karlsson has had a strong development the last couple of years. The goal was to place in the middle due to tough competition. After good performances in the first two disciplines, one being Stock Saw where he is the current Rookie world record holder, and a personal best in Single Buck, the Swede ended on a seventh place, only one point from reaching the top six and the next round.

– My goal was to place in the middle so I am very happy! I did two really good disciplines that took me to a shared lead but after that I lost focus in the final two disciplines. Of course, it was sad to not reach the next round, but I am still happy, says Edvin Karlsson.

Both competitions are available to watch on the official STIHL TIMBERSPORTS® Youtube channel.